Spring is a time of year when the world comes back to life.  The children were fascinated by the quickly changing world around them.  After months of cold and a landscape without leaves, grass and flowers, the children were drawn to many aspects of what they saw and our new investigation could have gone in a variety of directions.  We just finished preparing our garden and the children were very interested in the bugs that they found during the planting process.  They saw pill bugs, earth worms, lady bugs and butterflies.  After observing them for a week we notices that this was the topic that captured their attention the most.

We also noted that the scientific process would be able to be taught through this investigation and it would be a good investigation to address the Ohio Early Learning and Development Standards that we needed to address before year end. 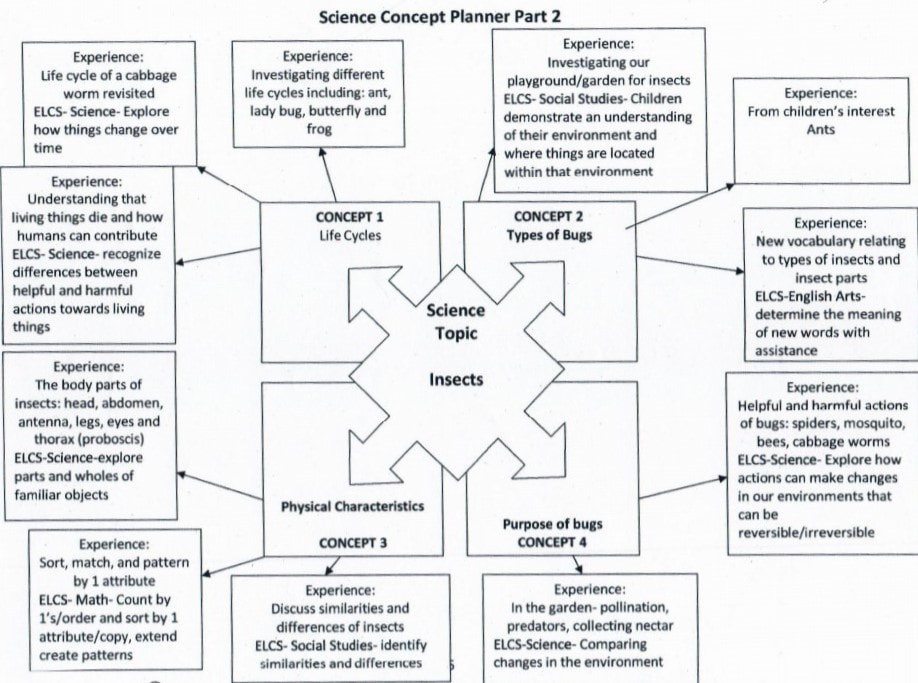 INTEGRATING STANDARDS AROUND THE STUDY  OF INSECTS
The children used a model to create insect words.  They matched the magnetic letters to the model.  Through this experience the children will be able to identify matching sounds, identify same and different sounds, and understand new words.

The children explore plastic bugs as they sort by one or more attributes. Through this experience children were able to gather, sort, classify, and compare objects naturally. They sorted by shape, size, color, and type. 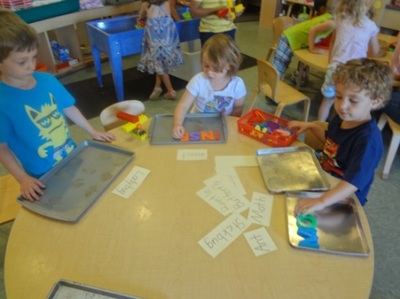 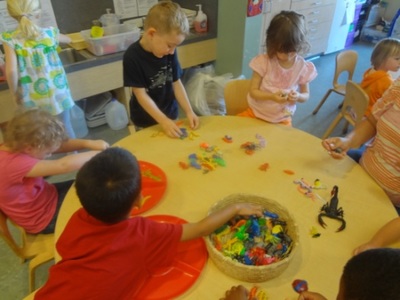 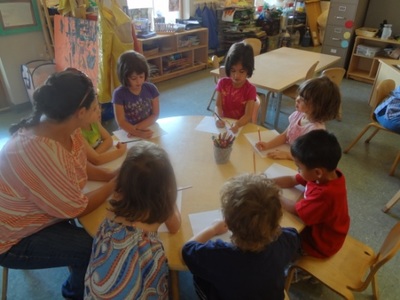 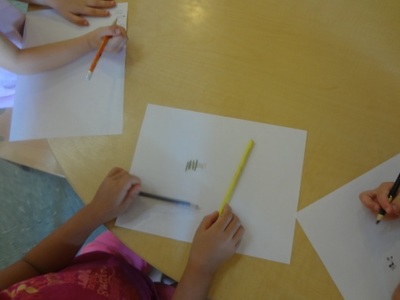 HOW SCIENTISTS LEARN ABOUT INSECTS
The children researched insects through books.  They recorded their findings and asked open ended questions as they used the resources to learn new information and answers to their questions.

The children explored plastic bugs as they classified them by type. They discovered the words by identifying the sounds and blending the sounds together.   Through this experience children were able to identify and learn the meaning of new words.

​Outside they navigated through a familiar environment to explore bugs on the playground. The children engaged in simple scientific inquiry and were able to observe ants, beetles, broccoli worms, crickets, spiders, pill bugs, flies, bees and butterflies. They demonstrated the safe use of tools such as magnifying glasses and bug catchers.  They learned to respect the insects and handle them carefully.  They also learned about which insects could sting or bite. The children recorded their findings with pictures and words using clip boards and paper.  They also discussed the differences between moths and butterflies. 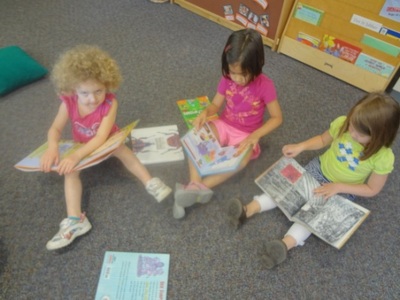 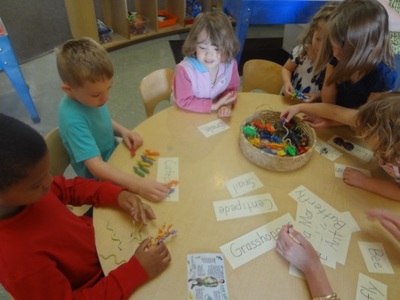 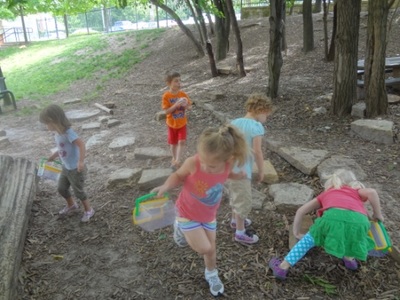 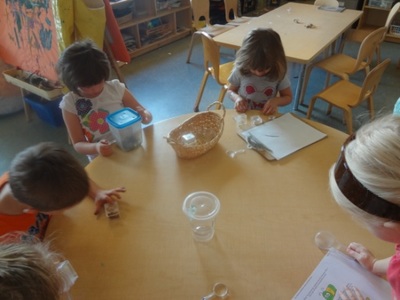 OBSERVING INSECTS
The children explored plastic bugs by classifying them into groups: including insects having six legs, arthropods having more than six legs, and arachnids having eight legs. The children had the opportunity to sort and classify bugs by counting the number of legs and body parts.

The children went on a bug hunt on our playground.  They gathered, sorted and matched real bugs to pictures of bugs. During this experience the children recorded their finding by circling the insects that they found on paper. 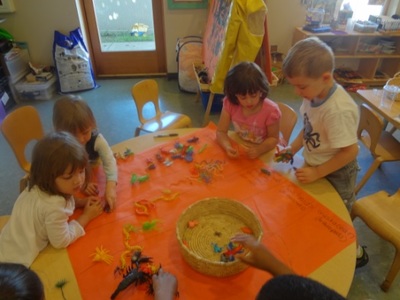 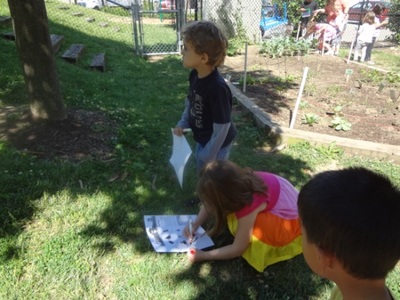 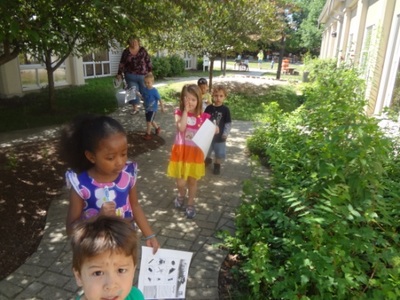 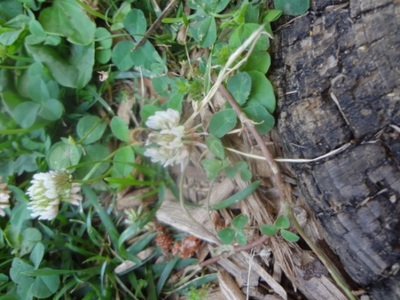 RESEARCHING INSECTS
The children investigated arthropods by researching them in informational books and observing live insects.  They discovered that arthropods are:  insects which have three body parts and six legs; arachnids which have eight legs; and other arthropods that have more than eight legs.  The children discovered that the majority of insects are beetles.
​
During this experience the children labeled the parts of insects and were able to explore and identify the parts and whole of familiar insects.  They were also able to identify similarities and differences among arthropods found on our playground.  This experience provided the children the opportunity to develop their skills in writing and identifying letters and words. 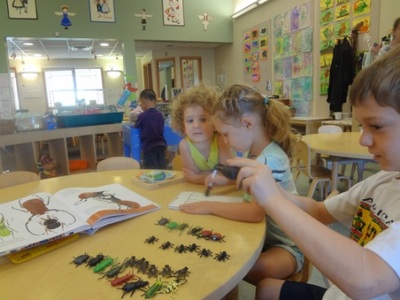 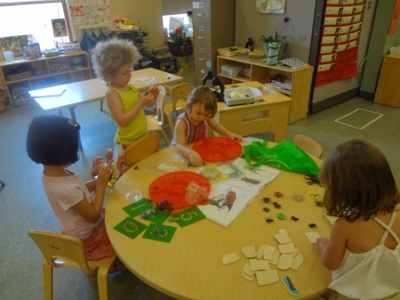 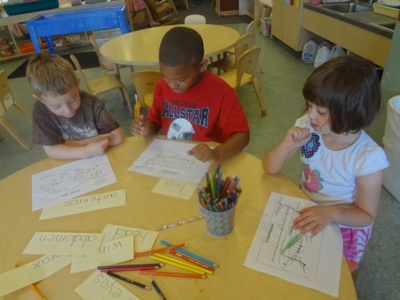 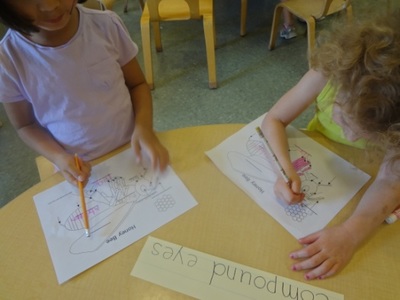 INSECT MODELS
During our insect investigation the children used stamps and a model to make a list of insect parts on paper.  This experience gave the children an opportunity to practice emergent reading skills including letter, sound, and word recognition.  The children also investigated arthropods and sorted them by attribute: insects, arachnids, and other arthropods with more than eight legs. Through this experience the children had the opportunity to gather and sort like objects and classify objects by one or more attributes (OELDS).

The children also used informational books as they created a model of an insect. They drew a plan for their three dimensional insect model.  After drawing their insect, the children labeled the parts.  Through this experience the children had the opportunity to build insects from parts to whole and engage in simple scientific inquiry by recording data and representing events using a variety of  media as stated in the Ohio Early Learning and Development Standards (OELDS). 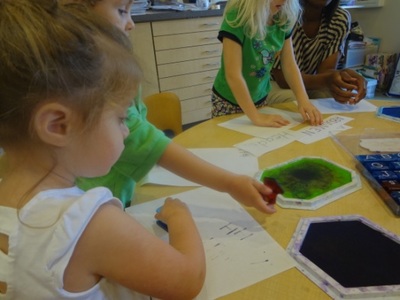 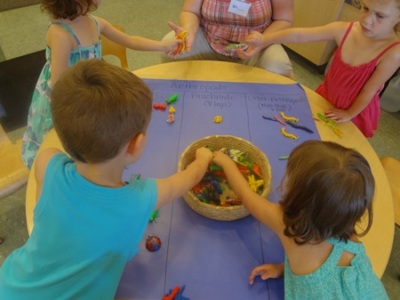 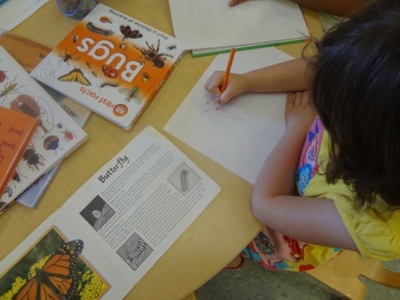 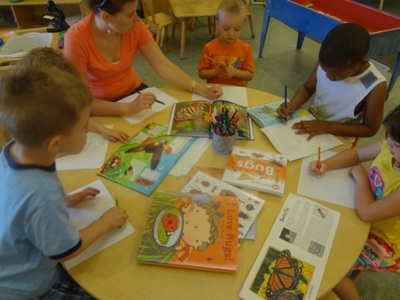 HOW INSECTS EAT
During our insect investigation the children wanted to learn about how insects eat.  They discovered that insects suck using a straw like tube called a proboscis, lap food with their tongues, or chew and mash food with their jaws. The children experimented with eating like an insect by putting their hands behind their backs and using their teeth to chew, lapping with their tongues, and sucking with a straw.  They tried to eat yogurt, crackers, and juice like an insect.  We provided pictures of real insect mouths and diagrams of insect mouths for children to reference and see details.

Through this experience the children had the opportunity to use familiar objects to accomplish a purpose, complete a task, or solve a problem and learn new words (OELDS).  They also had an opportunity to develop fine motor skills by pouring liquid and scooping food out of a bowl with a spoon. 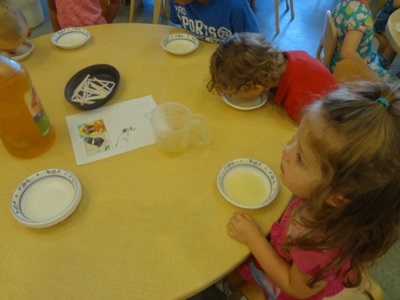 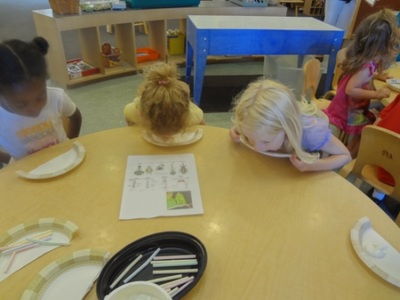 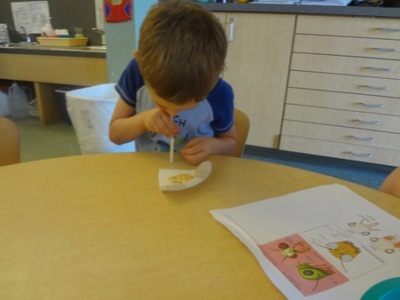 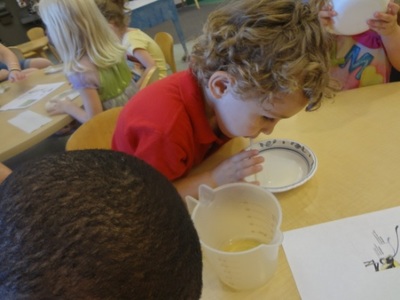 Demonstrating Ohio Early Learning and Development Standards
The children were able to make a connection to a book read at meeting time about patterns.  They used pictures of flies, ants, and fireflies to glue patterns on strips of paper.  This experience gave the children the opportunity to create patterns using pictures (OELDS).  The children also used magnetic letters to create arthropod words on metal trays.  They matched an insect word with the appropriate part on the models and/or picture. Through this experience the children were exposed to letter, sound, and word recognition (OELDS). 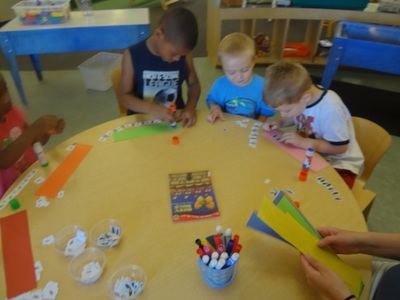 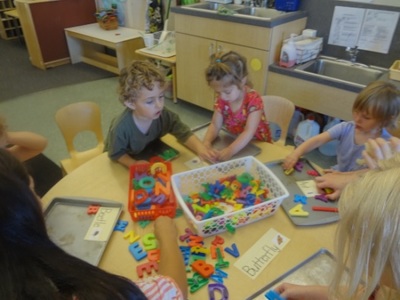 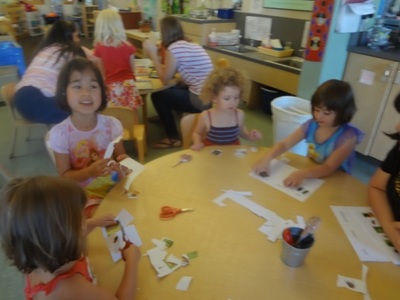 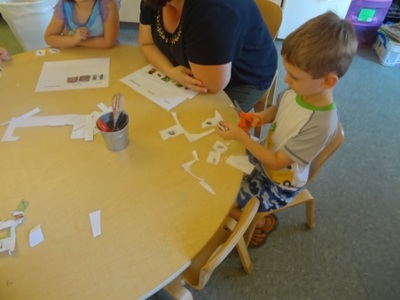